This site uses cookies to secure your navigation, analyse your behaviour for audience measurement purposes and integrate services to improve the interactivity of the site. Know more

A "cookie" is a piece of information, usually small and identified by a name, which may be sent to your browser by a website you are visiting. Your web browser will store it for a period of time, and send it back to the web server each time you log on again.

Different types of cookies are placed on the sites:

The different types of cookies used on this site

These cookies allow the main services of the site to function optimally. You can technically block them using your browser settings but your experience on the site may be degraded.

Furthermore, you have the possibility of opposing the use of audience measurement tracers strictly necessary for the functioning and current administration of the website in the cookie management window accessible via the link located in the footer of the site.

About the AT Internet audience measurement tool :

AT Internet's audience measurement tool Analytics is deployed on this site in order to obtain information on visitors' navigation and to improve its use.

The French data protection authority (CNIL) has granted an exemption to AT Internet's Web Analytics cookie. This tool is thus exempt from the collection of the Internet user's consent with regard to the deposit of analytics cookies. However, you can refuse the deposit of these cookies via the cookie management panel.

Third party cookies to improve the interactivity of the site

This site relies on certain services provided by third parties which allow :

These third parties will collect and use your browsing data for their own purposes.

When you start browsing an eZpublish site, the appearance of the "cookies" banner allows you to accept or refuse all the cookies we use. This banner will be displayed as long as you have not made a choice, even if you are browsing on another page of the site.

You can change your choices at any time by clicking on the "Cookie Management" link.

You can manage these cookies in your browser. Here are the procedures to follow: Firefox; Chrome; Explorer; Safari; Opera

Mammalian cells have evolved complex stress signaling pathways that are activated in response to a range of physiological changes and different pathological situations. These pathways initiate a wide array of adaptative mechanisms and ultimately, if necessary, programmed cell death. Such stresses commonly include cell extrinsic factors such as UV irradiation, hypoxia, viral infection and deprivation of nutrients and also intrinsic stresses such as endoplasmic reticulum (ER) stress. Reversible phosphorylation on serine 51 of the α subunit of eukaryotic translation initiation factor 2 (eIF2α) is a highly conserved regulatory event activated in response to diverse stresses. In mammals, four protein kinases are known to couple distinct upstream stress signals to eIF2α phosphorylation.

GCN2 kinase (General Control Non-depressible-2) is activated in response to amino acid deprivation by binding to uncharged tRNAs via a histidyl-tRNA synthetase related domain and the PERK kinase (PKR-like ER kinase) by the accumulation of unfolded proteins leading to the endoplasmic reticulum stress (ER) (Figure 1). Regarding the PKR kinase (Protein Kinase double-stranded RNA-dependent), it is activated by double-stranded RNA (dsRNA) during viral infections and by several cytokines (interferon g, TNFα and IL-1β). Finally, HRI kinase (Heme Regulated Inhibitor) is mainly involved in erythrocyte differentiation during erythropoiesis and in cellular responses to intracellular bacterial pathogens. The phosphorylation of eIF2α elicits a severe decline in de novo protein synthesis as its primary consequence and is an important strategy in the cell’s armory against a large panel of stressful insults. Accompanying this global translational control, it also favors increased translation of a selected number of mRNAs containing short upstream open reading frames.

One of the proteins for which translation is increased is activating transcription factor 4 (ATF4), a member of the ATF subfamily of the basic leucine zipper (bZIP) transcription factor superfamily. ATF4 is a master regulator that triggers increased transcription by binding to C/EBP-ATF Response Element (CARE) sequences of a subset of specific target genes involved in metabolism, nutrient uptake, control of redox status, and regulation of apoptosis and autophagy. The idea that ATF4 is a common downstream target that integrates signaling from multiple eIF2α kinases has led to the eIF2α-ATF4 pathway being referred to as the integrated stress response (ISR). Importantly, the ISR has been shown to be involved in a number of human stress-related pathologies including cancer or neurodegenerative disorders.
The CARE-LUC mouse model

To visualize the activation of the ISR signaling pathway in response to stress at the whole animal, we generated a transgenic mouse line called CARE-LUC expressing the luciferase reporter gene (LUC) under control of CARE sequences able to bind ATF4 (Figure 2A). Luciferase expressed in the different tissues catalyzes the oxidation of luciferin injected into the animal. The light emitted in this reaction is proportional to the luciferase gene expression level. Its detection allows to visualize the activation of the ISR pathway according to stresses, physiopathological or pathological conditions in (i) the living animal by bioluminescence imaging, (ii) each organ or tissue by bioluminescence imaging and enzymatic assay and (iii) each cell by immunohistochemistry using an anti-luciferase antibody.
The activation profile of the ISR pathway in tissues is specific for the inducer. 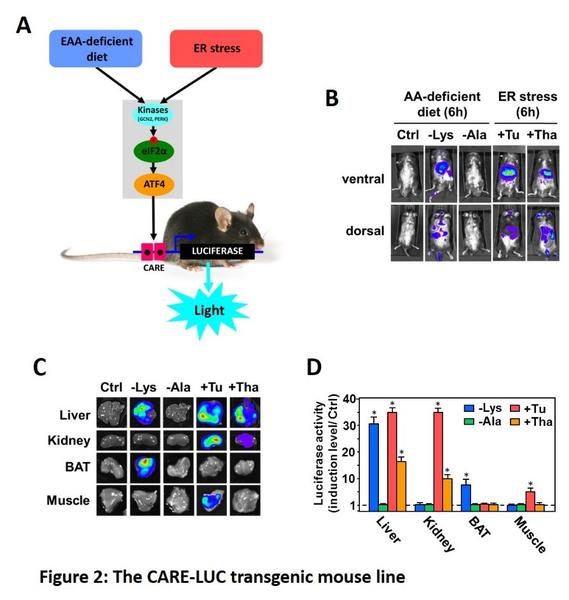 The CARE-LUC mouse model enabled to visualize the activation of the ISR pathway, through the kinase GCN2 in response to a nutritional stress resulting from the consumption of an essential amino acid-deficient diet such as lysine, or through the kinase PERK during ER stress consecutive of the injection of tunicamycin (Tu) and thapsigargin (Tha) (Figure 2B). The results of bioluminescence imaging in the mice abdomen confirm that the ISR pathway is activated by these stimuli. As expected, no activation is detected after consumption of a diet deficient in alanine, a non-essential amino acid that the body synthesizes. Subsequently, the analysis of luciferase activity in different tissues has enabled us to show that the activation profile of the ISR pathway will depend on the inducer (Figure 2C-D). Indeed, if the induction of this pathway is still observed in the liver, it is variable depending on the inducer in certain tissues such as kidney, brown adipose tissue (BAT) and muscle. We confirmed these results by measuring induction of expression of the ISR pathway target genes as Trb3, ATF3 or Xpot in these tissues. This difference in the activation profile cannot be explained by the presence or absence of GCN2 and PERK kinases that are both expressed in these tissues. Thus, the mechanisms governing tissue specificity of the induction of the ISR pathway remain to be identified.
The ISR pathway is activated in a hepatic fibrosis model.

It is now established that the ISR pathway is activated in a large number of pathological conditions such as Alzheimer's disease, tumor growth, nephropathy or bacterial infection. However, the role of this pathway in the progression or the fight against these diseases needs to be better characterized. We conducted a first proof of concept experiment using the CARE-LUC mouse line to study the activation of ISR pathway in a pathological situation such as hepatic fibrosis. This type of fibrosis is a result of chronic liver injury, which is characterized by abnormally high accumulation of components of the extracellular matrix in the liver parenchyma. We have demonstrated a correlation between the appearance of an induced liver fibrosis and a chemical activation of the ISR pathway through the PERK kinase. Immunohistochemistry experiments have enabled to demonstrate the induction of both the luciferase and collagen-1 proteins in hepatocytes. Thus, these data confirmed the relevance of the CARE-LUC mouse model for investigating stress-related pathologies.
Visualization of the activation of the ISR pathway in stressful situations leading to skeletal muscle atrophy.

A variety of stresses including starvation, muscle disuse, systemic illness and aging cause an alteration of skeletal muscle in a manner that promotes myofiber atrophy. The group of C. Adams has recently established that ATF4 plays a key role in age-related muscle weakness and atrophy and that this transcription factor is also required for skeletal muscle atrophy during starvation and immobilization. The mechanism by which ATF4 promotes muscle atrophy is complex because it regulates the expression of many genes. Three of those genes appear to be involved in reducing protein synthesis (4E-BP1) or in inducing skeletal muscle fiber atrophy (Gadd45a and p21). In skeletal muscle, upstream mechanisms that control ATF4 activity are not yet known and the role of eIF2α phosphorylation by specific eIF2α kinases remains to be demonstrated.

We sought to show the relevance of the reporter mouse model to study stress-related pathologies leading to skeletal muscle atrophy. CARE-LUC mice fasted for 48h show a significant increase of bioluminescence in their abdominal cavity (Figure 3A). To localize more precisely the origin of the luminescence, we excised and individually imaged skeletal muscles from control or fasted mice (Figure 3B). Tibialis and gastrocnemius displayed induction of bioluminescence in response to food deprivation. To confirm imaging data, we quantified luciferase activity in homogenates of muscle samples collected from control and fasted mice. In accordance with the results from noninvasive imaging, gastrocnemius and tibialis exhibited significant induction in luciferase activity under fasting conditions (Figure 3C). To confirm the correlation between skeletal muscle atrophy and the activation of the ISR pathway, we examined the mRNA level of several ATF4-dependent genes involved in reducing protein synthesis or in inducing skeletal muscle fiber atrophy and of the E3 ubiquitin ligase MuRF1, a well characterized atrophy associated transcript which is partially required for muscle atrophy. Figure 3D shows increased level of Gadd45a and 4E-BP1 and of MuRF1 under fasting conditions. Overall, these results highlight that the CARE-LUC mouse model represents an innovative tool for investigating the role of the ISR pathway in stress-related disorders leading to skeletal muscle atrophy.